Follow The Leader               From the founding year in 1965 to the sale of the company in 1988.This segement presents the years 1965 to 1969:               EDITORS NOTENow available on line a series of pages and photos that will attempt to tell the Leader Story from its humble beginning in 1965 to 1988 the year Leader Publications Limited was sold to a Sudbury publisher. We hope you will enjoy our efforts, as the story unfolds on these pages and future chapters.Leader Story writer and researcher Gord Clauws :Leader Story researcher and photo editor Ted Misselbrook: 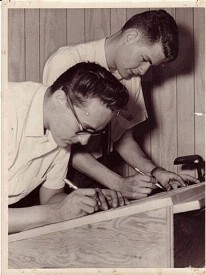 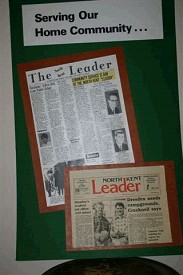 Equipment was another of the very important aspects needed to get the first edition ready for printing and here contacts that Clauws had with major newspaper suppliers came in handy. One of those supplier was Canadian Fine Color in London, Ontario. The two entrepreneurs journeyed to London to meet with officials of that firm and again it seemed a streak of luck was working for the two as an agreement  was reached that a "strip-printer" would be supplied, as well as photographic paper, chemicals and a host of other needed supplies. No promissory note, no cash up front...only a promise that we would make the necessary payments as required.        By the late summer of 1965 things were starting to come together. There was,  however one other very important aspect of the initial planning that came to be.         Both Misselbrook and Clauws knew Don Spearman, owner of Observer Press, a commercial printing operation in Dresden. Spearman was more or less Clauws' mentor in the early days at the Dresden News. Spearman had been editor, among other duties, at The Dresden News for several years, and in early 1960 decided to leave that operation as well and strike out on his own. He chose the village of Hensall in Huron County to start his newspaper. He continued there for about three years before selling the newspaper rights to a neighbouring newspaper and moving his commercial printing operation to Dresden.        Spearman was an excellent writer and wanted to see the two young men succeed. He offered to write the editorials for the first edition and that turned into a near full-time job as he toiled weekly pounding out editorials that were as local as city hall and as timely as the dateline on the newspaper. Clauws and Misselbrook today, both reflect that had it not been for his willingness to work horrendous hours with no pay, the company may very well have perished early.       Clauws, who was a bit handy with a hammer and saw, spent many night-time hours building wooden tables on which "light tables" were set to assist the paste-up activities for each page of the newspaper. Misselbrook kept busy with  his  evening hours by preparing "spec-layouts" and advertising promotions, so that he would be ready to sell for the first edition of the North Kent Leader.          By early September of 1965 everything seemed in order and both Clauws and Misselbrook gave notice to their respective employers that they were leaving those companies.          Clauws recalls telling his employer, Charlie Ross, that he had other plans for his life, but Ross, who apparently kept his ear to the ground, had already heard the rumours that a second newspaper was being contemplated for the town of Dresden, and confronted him. " I told the truth and said that that was indeed the plan," Clauws reminisces, " I told Ross that I had lived on promises of being able to buy into the Dresden News for too many years." In any event, the die had been cast and the two entrepreneurs were off to start their new adventure. 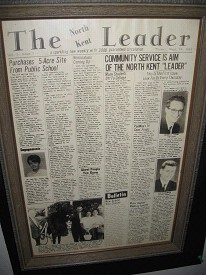 The first edition of the North Kent Leader was published on September 16th, 1965 with a circulation of 3000 copies.

Clauws and Misselbrook presented the first edition of the North Kent Leader on September 16th, 1965: 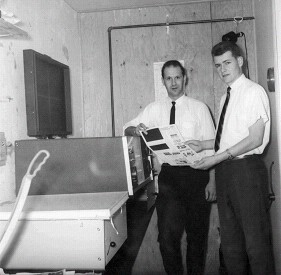 Bob Brooks of Sears Printing Supplies of Canada is shown in this 1966 photo along with North Kent Leader partner Ted Misselbrook. Brooks had just installed the Leader's new graphic arts camera, and was busy showing Misselbrook the skills needed to run the camera.

1966 was an important year in the growth of The North Kent Leader! 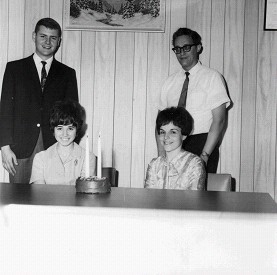 Celebrating the second year of the North Kent Leader, with a simple birthday cake and two candles are partners Ted Misselbrook and Gord Clauws with staff Doris (Stevens) Ross and Peggy Conrad.

A birthday celebration of sorts, was held at the downtown office with cake and coffee to commemorate the 2nd full year of newspaper publishing. 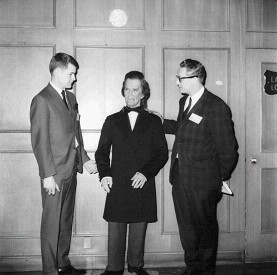 Ted Misselbrook and Gord Clauws are shown with Sir John A. MacDonald at the world famous Louis Tussaud's wax museum in Niagara Falls. Clauws and Misselbrook attending their 1st Ontario Newspaper Convention in 1968, and would continue the tradition over the next 20 years.

A FINAL CHANGE BEFORE THE NEW DECADE       One of final changes that was made to the operations before the end of the 60's was a change in printers. Since its inception The North Kent Leader had been printed in London by Webco Publications.       It was always an hours drive to get to the London location and at times, especially when the area was snowbound in the winter months it became a rather treacherous adventure.     Hence in 1969 the decision was made to change printers, moving to Community Web Printers on the outskirts of Tilbury. That firm was owned by Jerry Houle who had opened the printing plant a year or two earlier. The move made it much easier since the drive was only about 35 minutes on a clear day.     The Leader would continue to be printed by the Houle firm until 1976 when another move was made...this time to Petrolia. 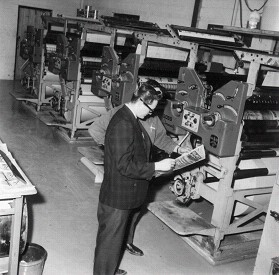 "Scratchin' Around with Clauws" appeared more than 900 times in The North Kent Leader! 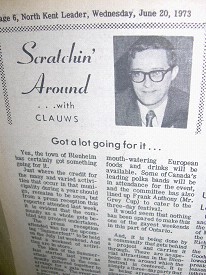 "Scratchin' Around With Clauws" had over 900 weekly presentations and was published 19 of the 23 years that Clauws and Misselbrook owned Leader Publications.

A COUPLE OF NOTEWORTHY EVENTS OF THE 60's

On a very personal note, two events were noted in the lives of the partners. Gord and Marilyn Clauws, announced the birth of a son, Shawn Gordon, on November 3, 1967 and Ted and Pat Misselbrook were looking forward to the arrival of their first born. She would enter the world as Jill Lynn Misselbrook on Feb. 6, 1970.                   THE END OF AN EXCITING DECADE     As the sun set on the 60's, it will be recalled as a decade of excitement throughout the world that included the assassination of a U.S. President and the now famed words of Newscaster Walter Conkrite "The Eagle Has Landed" in the summer of 1969 as Astronaut Neil Armstrong stepped down on the surface of the moon announcing, "One small step for man...one giant leap for mankind".    As kids throughout Canada and the United States were glued to their black and white television sets to see the debut of a new children's program "Sesame Street" and teens were dancing to the music of Neil Diamond's "Sweet Caroline" and "These Eyes" by the Guess Who or "Aquarius" by the Fifth Dimension, the two partners were looking forward to a new era with enthusiasm and ebullience. 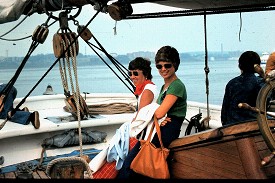 Pictured are Marilyn Clauws and Pat Misselbrook from a photo taken in the mid to late 60's at a annual newspaper convention.