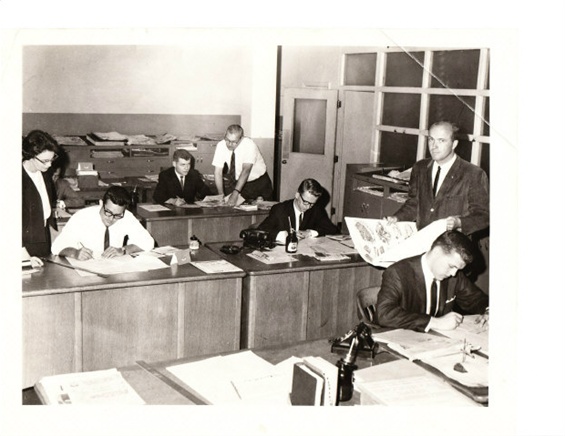 W.C. Nicholson passed away, Tuesday, August 30th/2016. Nicholson is pictured second row left with office secretary Barb. That's Bruce Smith at front desk and I'm in the back with sales manger Archibald Douglas. Woodroe Nicholson loomed large in my life. He was my friend and mentor, and he guided me with enthusiasim and skill when I joined the advertising department of the Chatham Daily News in the early 1960's. He introduced me to the power of positive thinking, an insisted that I develop an attitude of achievement. I did as I was told and I've always be grateful. My successes in no small measure is a direct result of his influence on my life. Woodie was a brilliant ad salesman, sales manager and sales trainer, his achievements with Thompson Newspapers are legendary. More than that he was a trend setter, and a hugely successful entrepreneur. Woodie went on to create a publishing and printing empire that he sold some years later to the Blackburn Group. In his spare time he flew planes and wrote books. Simply said Woodie was power-house of activity. He fell in love with Diane, who became his best friend and wife. His proudest accomplished, he once told me, was his family, "five beautiful people with happy, interesting and rewarding lives". Diane he said "was amazing, beautiful and the best person he ever knew". The world lost one of the good ones with his passing. I lost a friend of 55 years and that leaves me more than a little heartbroken. “30” Ted Misselbrook